Cabo Espichel: dinosaur footprints and worship in an extraordinary landscape 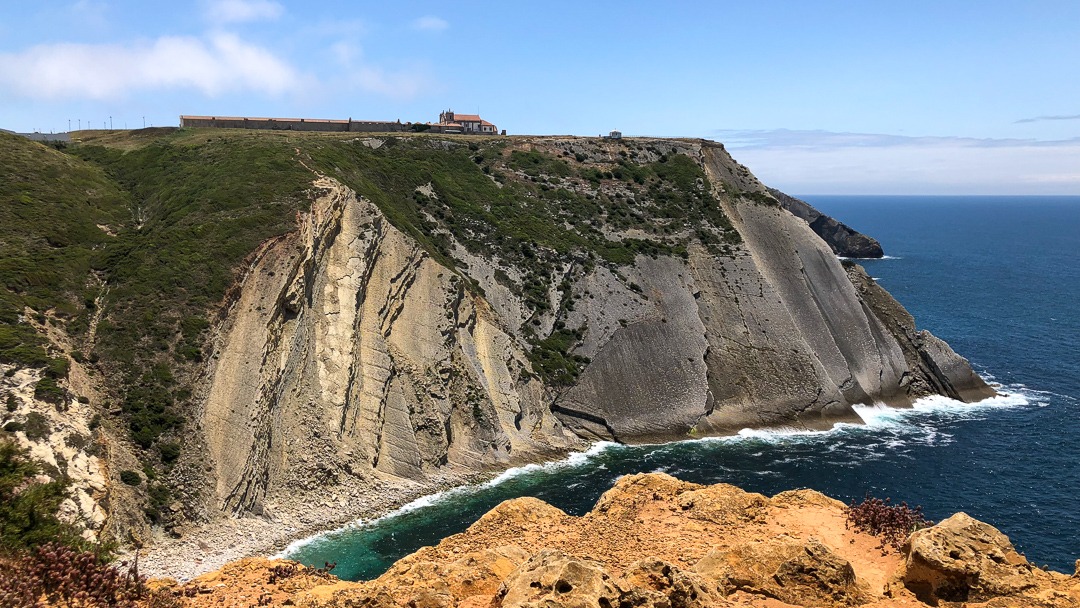 Portugal has some well-known capes that attract many visitors. Cabo de São Vicente in the Algarve, the southwesternmost point of mainland Europe and Cabo da Roca, the westernmost point of mainland Europe, are the best examples. A less famous cape is Cabo Espichel, but certainly not less interesting. Not only will you find stunning nature and spectacular ocean views, it’s also a sacred and historical place full of stories and myths.

Standing on the 134 metre tall cliffs of Cabo Espichel, it’s not difficult to understand how this became an important place of worship. A place where legends and myths attracted pilgrims and other visitors for centuries. And a place of great historical importance. The footprints left by dinosaurs take us back 150 million years ago. A bit more recent, on July 29th 1180, the Portuguese Navy won its very first naval battle here. The commander was D. Fuas Roupinho, who after this great victory, was killed four years later in another battle against the Moors at Cabo Espichel.

With its back turned to the Atlantic Ocean, the Sanctuary of Our Lady of Cape Espichel, dominates the rough and high cliffs. It consists of a church, pilgrims’ lodges, the Ermida da Memória, Casa da Ópera (now in ruins), Hortas dos Peregrinos, Casa da Água and aqueduct. 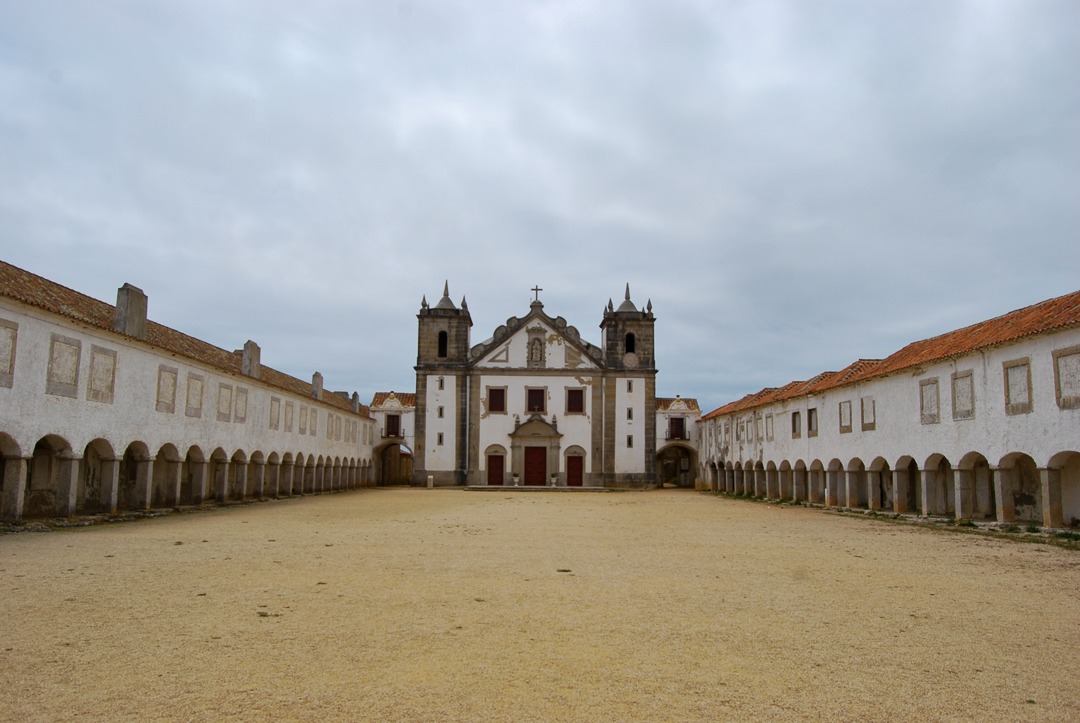 The church and pilgrims’ lodges

The cult originated with the apparition of the Virgin Mary at the top of the Lagosteiros bay’s southern cliff in 1410. Although there are different versions of this event, the most common is that two local fishermen saw the Virgin Mary rise from the sea on a mule. She climbed the near vertical cliffs and vanished at the top, leaving nothing but the giant foot prints of the mule (these prints do exist, but are actually dinosaur tracks). 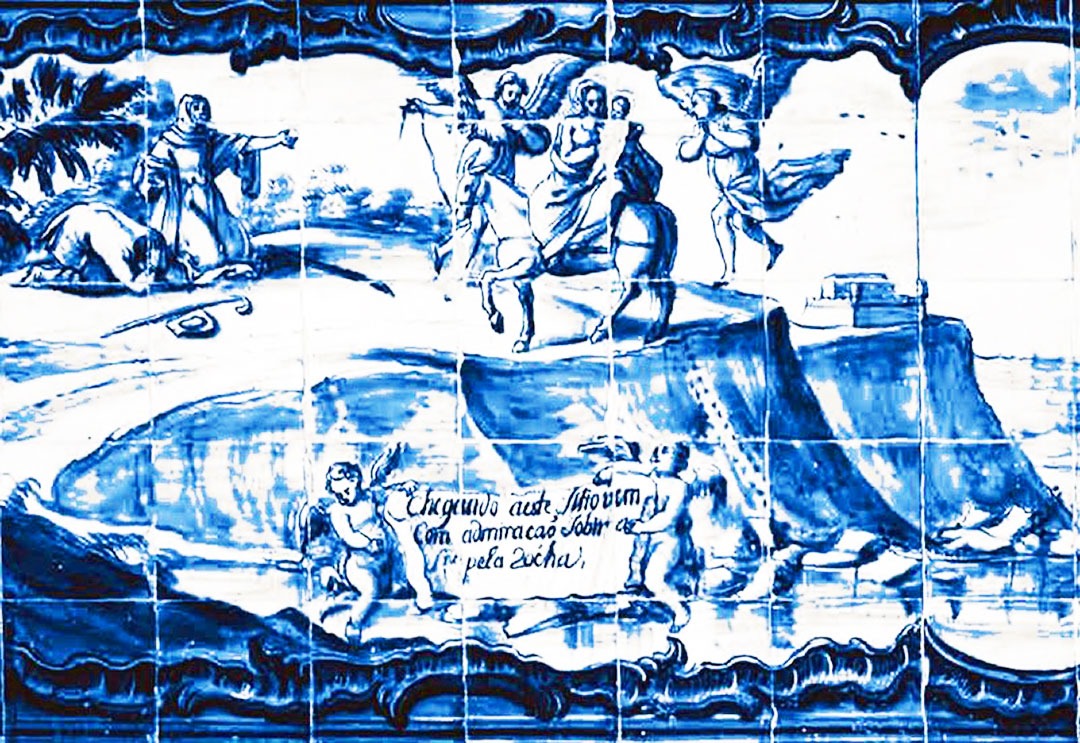 The story told in azulejos

The Ermida da Memória, a small hermitage, reminds visitors of the place where Mary appeared. Inside the chapel traditional blue and white azulejos tell the story of the apparition. The chapel is closed off to visitors, but you can see the tiles through the glass door.

After the apparition, more and more pilgrims came to visit the site, resulting in the construction of the Igreja de Nossa Senhora do Cabo between 1701-1707. This church has a sober Baroque exterior, but a richly decorated interior. Especially the ceiling is very beautiful, painted by Lourenço da Cunha. Religious ceremonies still take place in this church, it’s also open to visitors. 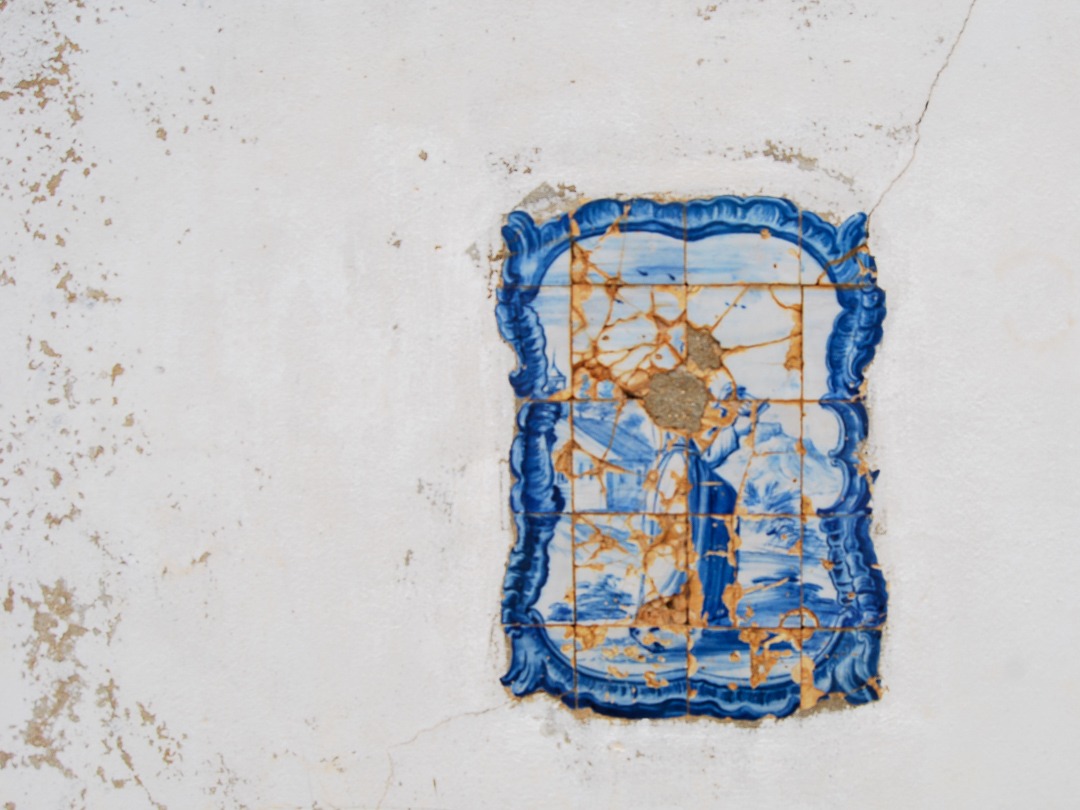 Damaged tiles on the outside of the Ermida da Memória

To accommodate the pilgrims, two symmetrical wings were built outside the church, called Casas dos Círios. You can’t enter this ‘hostel’ but it’s nice to have a walk along the pretty arcade. 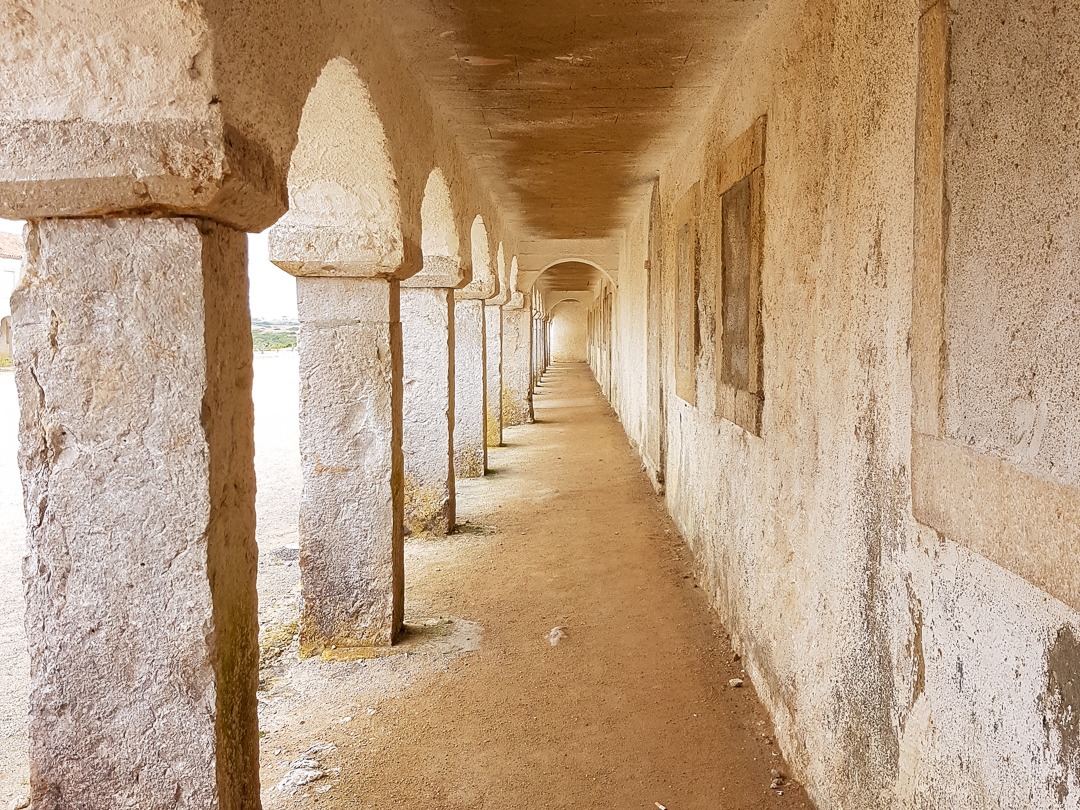 Some of the best preserved dinosaur footprints of Portugal are situated on the cliffs of Cabo Espichel coastline. There are two different sites: the Pedra da Mua footprints from the Upper Jurassic period and the Lagosteiros prints from the Lower Cretaceous period. Both sets of tracks are just 500 metres apart, but in time are separated by about 50 million years. Also they were formed in two very different rock types.

At Pedra da Mua the tracks of Sauropods, huge herbivore dinosaurs with long necks, are visible against the flat grey rock of the cliffs. These are the prints that have been traditionally associated with the 14th-century apparition of the Virgin Mary.

Although they are big, you will not be able to see the prints up close. The closest you can get is from Lagosteiros beach, but the lack of a proper path makes it difficult to get down there. The better option to see these footsteps is from Lagosteiros tracksite, almost 400 metres from the Pedra da Mua prints. 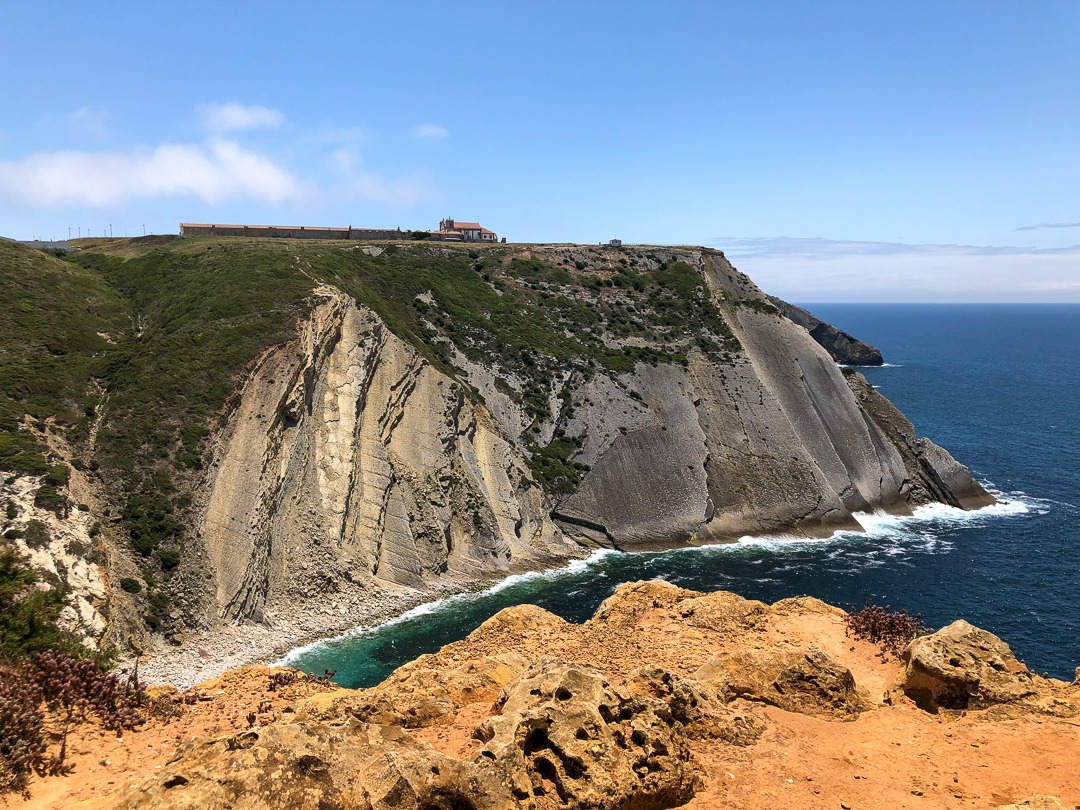 The Pedra da Mua dinosaur footprints are captured in this cliff

The smaller Jazida dos Lagosteiros tracks are made by Theropods, two-legged upright meat-eating dinosaurs, and Ornithopods, large bipedal, herbivorous dinosaurs. There’s a signed footpath to these prints, but be very careful, the final part can be rather tricky.

The footprints in general are difficult to find without the help of a local guide. You can easily miss them, especially if you don’t know what you are looking for. 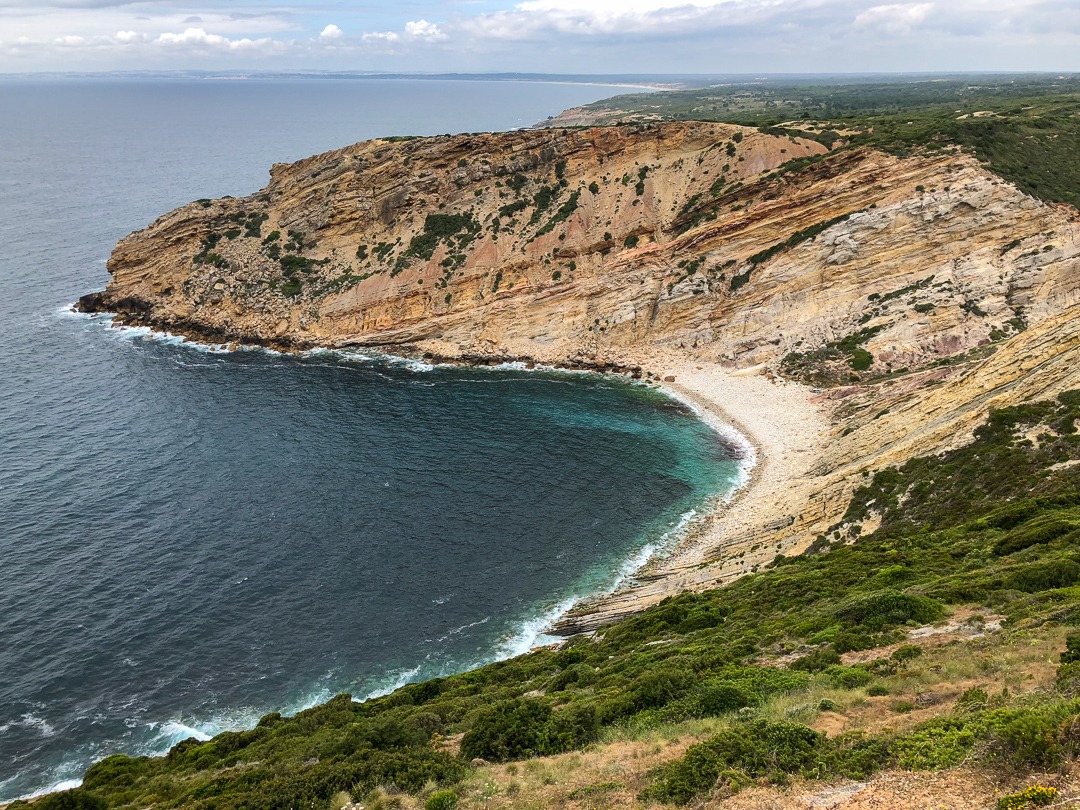 As early as 1430 the monks of the hermitage had built a beacon to warn ships of the treacherous waters around Cape Espichel. Nevertheless the Portuguese coastline was known by foreign ships, especially the British, as the ‘black coast’, because there was no proper lighting system to support navigation. After the 1755 earthquake, reforms initiated by the Marquis of Pombal ordered for an organized Lighthouse Service and the construction of six lighthouses. The Farol do Cabo Espichel was one of them. 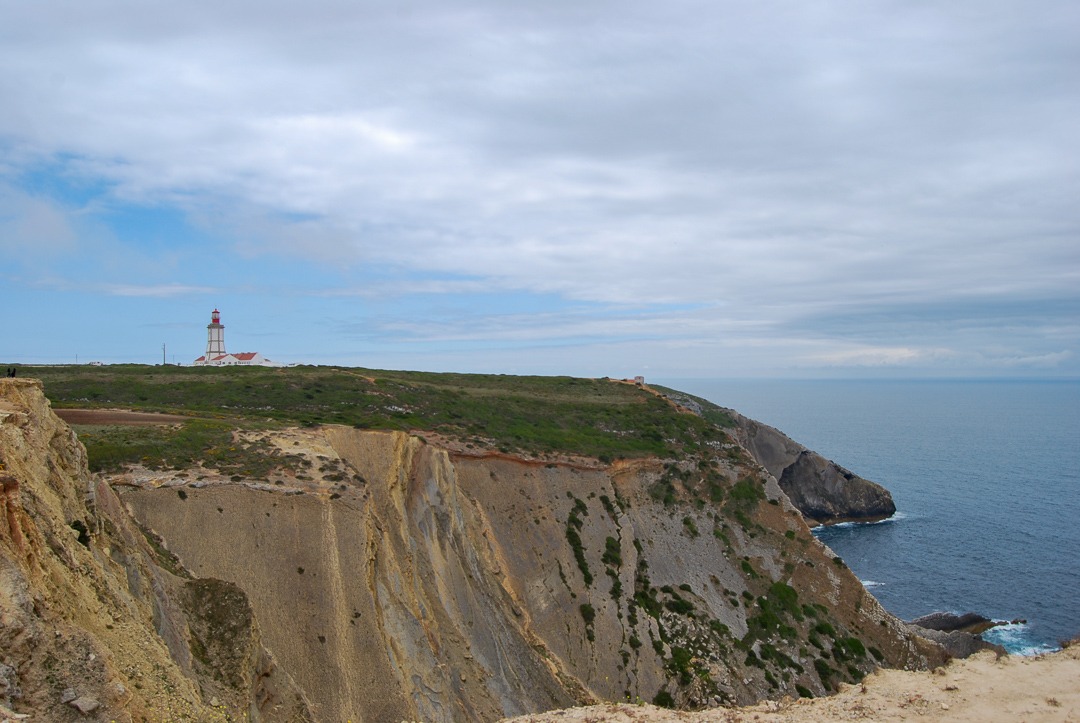 The current lighthouse was built in 1790, making it one of Portugal’s oldest lighthouses. The white, hexagonal tower is 32 metres high and consists of three levels. This is the oldest part of the lighthouse, the buildings surrounding it were added much later. The lighting system was changed in 1883 and experienced several improvements since then. Nowadays the signal can be seen for more than 40 kilometres out to sea.

Since 1892, the Portuguese Navy has been responsible for maintaining the lighthouse network on the coast of Portugal. They welcome visitors at the Farol do Cabo Espichel every Wednesday afternoon, but bear in mind that explanations will be in Portuguese. To climb the tower there are 135 stone steps and 15 metal steps to conquer, but it’s well worth it! 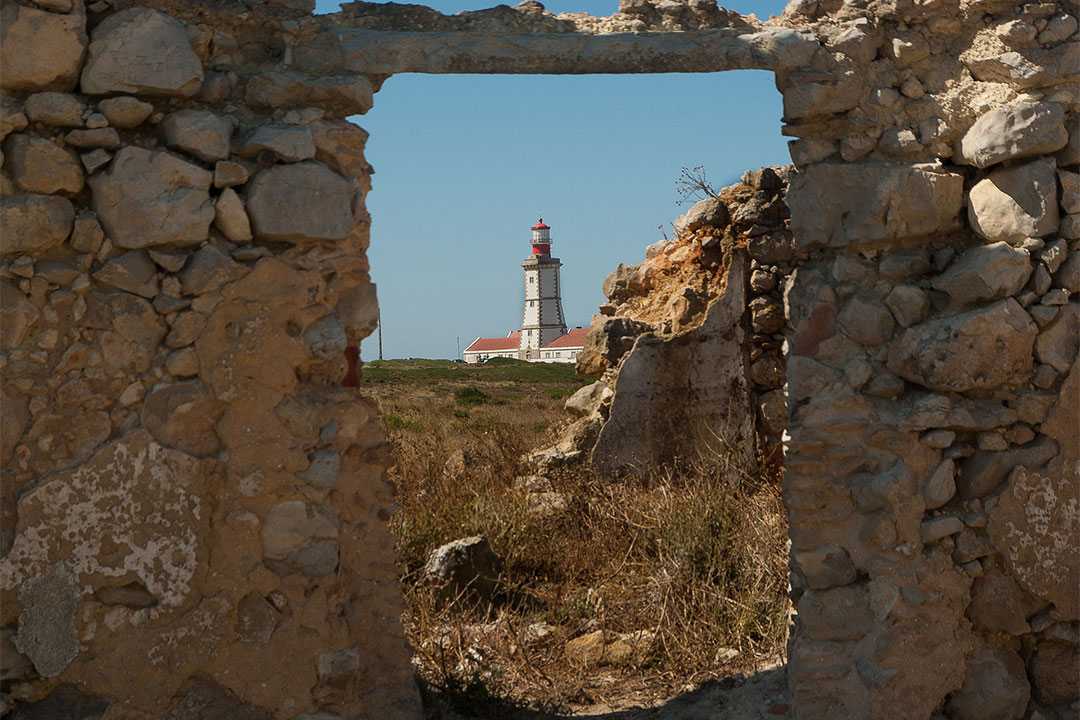 The Lighthouse of Cabo Espichel

Every year the apparition of the Virgin Mary is celebrated at Cabo Espichel. It attracts hundreds of pilgrims and other visitors in the last weekend of September. The most important event occurs on Sunday at 5pm. Then Nossa Senhora do Cabo Espichel is honoured by taking her outside in an impressive procession. The festival is not just religious. Expositions, music, dancing and other activities are part of the program.

Cabo Espichel is situated on the western coast of Portugal, in the district Setúbal, some 50 kilometres south of Lisbon. By far the easiest way to get there is by car. Public transport to Cabo Espichel is very limited. If you want to go down to the beach or do other hiking, make sure to wear proper footwear.

Other fun things to do in the area: 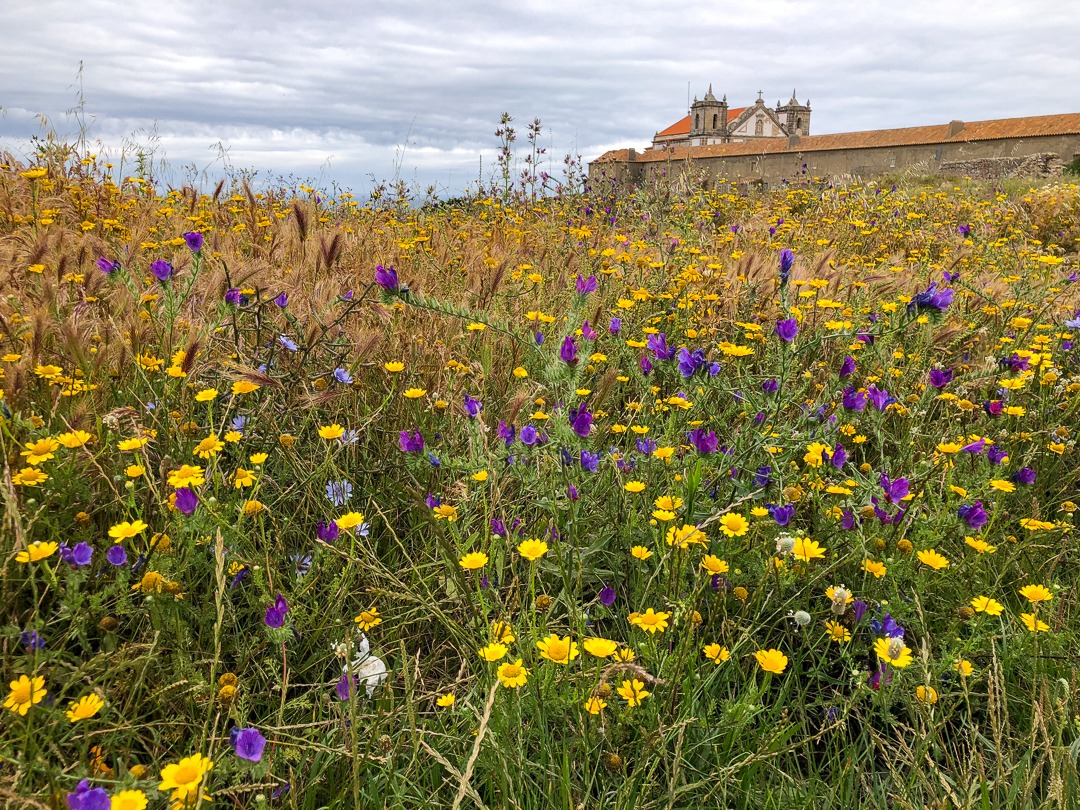 Cabo Espichel is a place of beautiful untouched nature 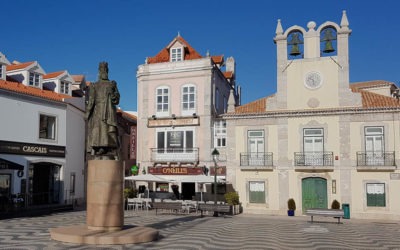 Take the train from Lisbon to Cascais

Take the train from Lisbon to the town of Cascais and enjoy the beach, great seafood restaurants and pretty houses.