Best of, See and do

There is so much to see in the streets of Portuguese cities: colourful doors and windows, amazing street art and beautiful tiles. But there is more to enjoy right beneath your feet! The typical Portuguese pavements with patterns in white and black stones are called ‘calçada portuguesa’. Look down and discover a great variety in design, made by very skilled artisans.

What is calçada portuguesa

Paving as a craft is believed to have originated in Mesopotamia, where rocky materials were used in the inside and outside of constructions, being later brought to Ancient Greece and Ancient Rome. In Portugal it appeared around 1500, but it was not until the 19th century that it was executed the way we know it today.

In 1842 the São Jorge Castle in Lisbon served as a military base under the command of Lieutenant general Eusébio Cândido Cordeiro Pinheiro Furtado. He ordered part of the stronghold to be paved with a zigzag design of black and white stones. The task was executed by the prisoners in the fort, making them the first, although involuntary, calceteiros. The pattern, unfortunately not there anymore, was a big success; the people of Lisbon loved it. Quickly after, the Praça de Dom Pedro IV, better known as Rossio, received a similar makeover. With black and white limestone the central square of the city was covered in a pattern of waves. The 8712 square metres of pavement are now one of the best known examples of calçada portuguesa in Portugal.

Within years, many of the city sidewalks and squares, as well as those in other cities, were carpeted in small pieces of limestone, some laid in patterns but others just in white stone. The technique was copied in Porto, Guimarães, Faro and Ponta Delgada. Later it spread to the Portuguese colonies and even other countries.

Detail of the entry of the University of Coimbra

The stone used for the calçada portuguesa is, in most cases, limestone. White and black stones, the most popular colours, along with the less common gray, are from the Serras de Aire e Candeeiros region of central Portugal. The rare yellow and pink are mostly quarried in the southern Alentejo region. The Portuguese islands are a different story. Here the common used black stone is basalt. This material is much easier to find, which explains why the black and white are often used the other way around: the patterns are white and the surrounding stones black.

The stones are either cut by a machine or by hand with a hammer. The desired pattern is covered up with a mold and then the first stones are placed around the mold. The small stones cannot be separated more than two millimetres. Once the contours of the mold are finished, the mold can be removed and filled with a distinctive colour so the pattern appears. 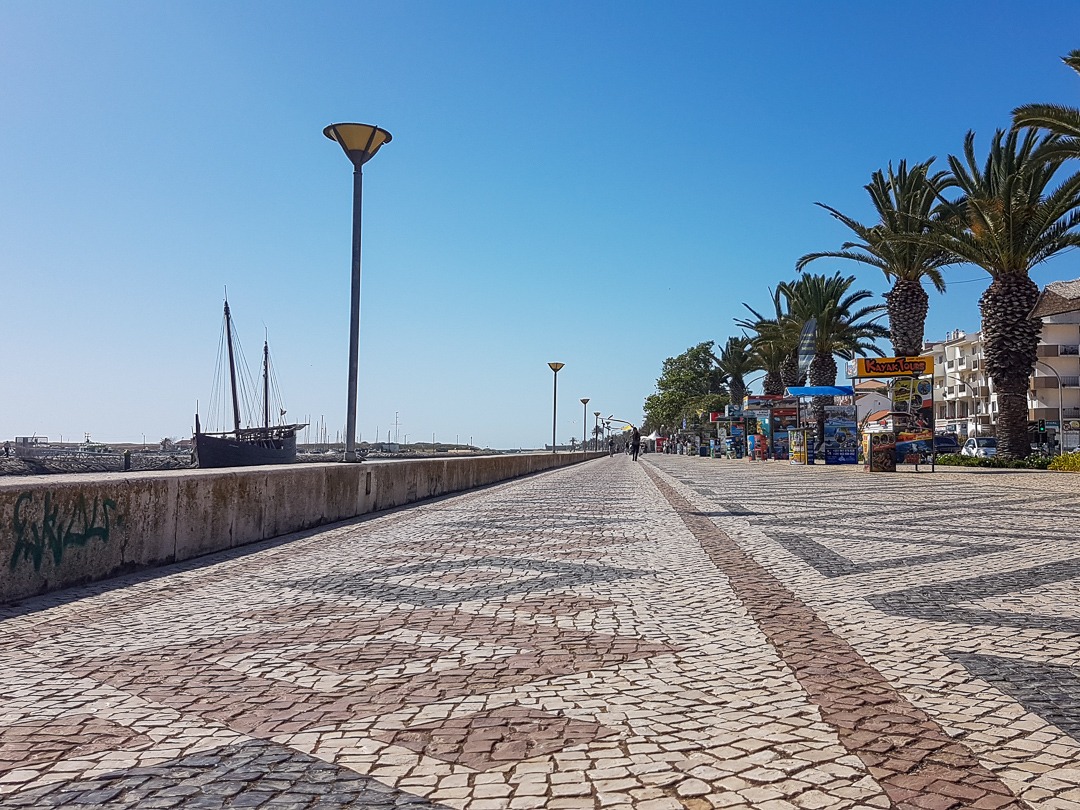 One of the most common patterns is waves, a homage to Portugal’s maritime past. Ships, dolphins, rosettes and the cross of Christ are also connected to this theme. Other much used designs are references to nature, such as birds or flowers, and geometrical shapes.

The smaller the stones, and the more complicated the pattern, the longer the work takes. For plain pavements, an artisan can create around 10 square metres a day, but if the pattern is more elaborate, only about 1 square metre a day is possible. 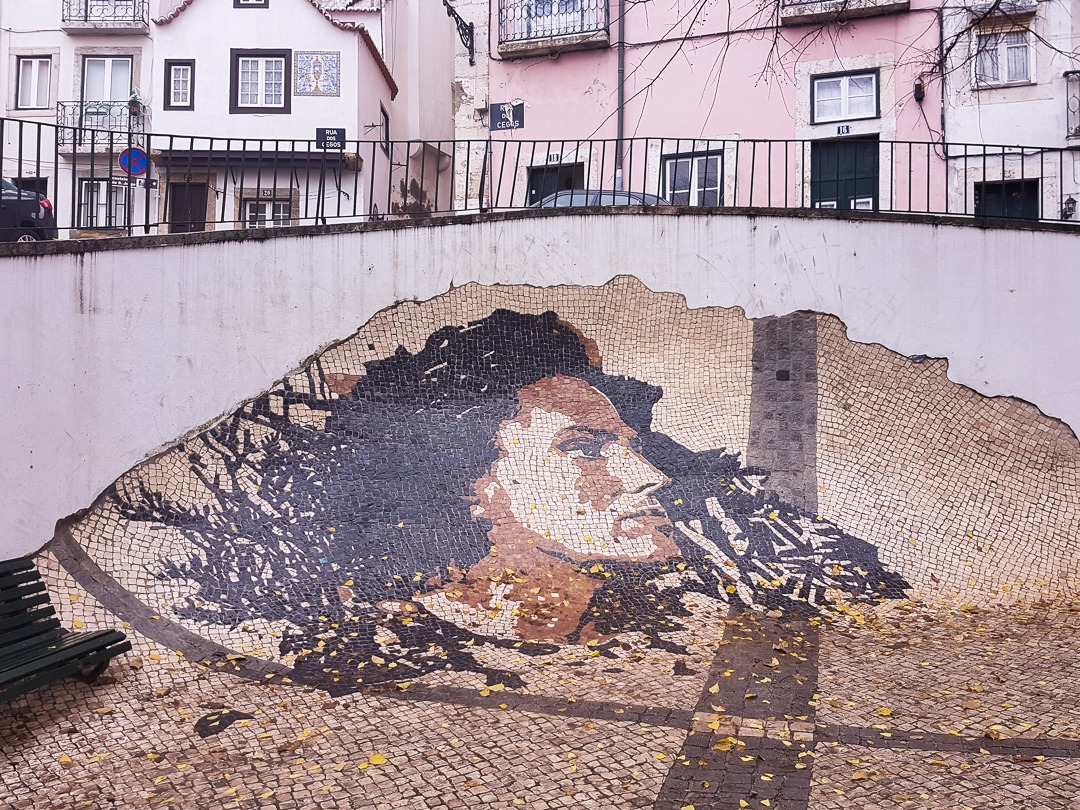 Collaboration between street artist Vhils and the calceteiros of Lisbon

Being a calceteiro is no easy job. It’s physically challenging, having to bend your back all day and being exposed to the hot Portuguese sun. It also requires of lot of patience to put all those small stones in place. The long hours and low wages typical of calceteiros have reduced apprenticeships and thus new pavers.

In 1986 the City Council of Lisbon established a special school to educate new calceteiros, the Escolas de Calceteiros e Jardineiros de Lisboa in Olivais. At that time the city was employing around 400 pavers to preserve and expand the calçada portuguesa. Although since the nineties the introduction of concrete and asphalt pavements reduced the required number of craftsmen drastically, the city still struggles to find enough students that actually graduate. Enough people apply, most of them not particularly passionate about the art and skill, but looking for a new way to make an income. But many drop out when they find the work to be too hard or when other possibilities appear. Between 1986 and 2019 only 224 students received the certificate marking them as professional stone pavers.

The future of calçada portuguesa

The lack of calceteiros is not the only thing threatening the calçada portuguesa. The high costs of preserving the pavements is a problem for city councils throughout the country. For example, the city of Ponta Delgada in the Azores spends more than 300 thousand euros each year on the patterned pavements. Especially the difficulty of obtaining appropriate stones can make it all very expensive. As it wears quicker than concrete or asphalt, there is dropping interest in investment and construction.

Furthermore, the pavement is less safe as it provides less traction when wet and loose stones can become tripping hazards. Especially elderly people complain about the risks of leaving their houses. Porto in the North and Olhão in the Algarve have already replaced some calçada in exchange for a more safe alternative, just like the neighbourhood Campolide in Lisbon.

Nevertheless, there are also initiatives that honour the calçada portuguesa and the calceteiros. Artists have been called upon to create new designs and give modern twists to this important part of Portuguese tradition. That resulted for example in the beautiful image of fado singer Amália Rodrigues in Lisbon, made in 2015 by street artist Vhils (Alexandre Manuel Dias Farto) together with the calçeteiros of the city.

The hard, but very much appreciated work of the calceteiros is also honoured with a monument in Lisbon. It consists of two bronze figures created by Sérgio Stichini in 2006. In 2017 the City Council gave the statues a more prominent place on the Praça do Restauradores, next to the hotel Avenida Palace. Watch this video to not only see the monument but also the calceteiros of Lisbon doing their work.

The future of calçada portuguesa is uncertain. There are several valid arguments to replace it with safer and easier alternatives. But it’s also an important piece of Portuguese heritage and hopefully it will never disappear completely from the historical city centres.

Where to find calçada portuguesa

Where to find calçada portuguesa? Everywhere! One pavement is obviously more spectacular than the other, but you will definitely find some pretty examples no matter where in Portugal you are. Check the pictures in this article to find some interesting suggestions. And don’t miss the article on the best pavements of Lisbon. In the Azores go to Ponta Delgada to be overwhelmed by many beautiful designs! 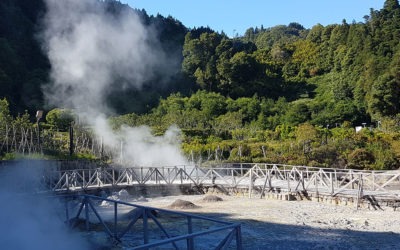 The Azorean island of São Miguel has many special flavours to discover. Especially these seven! 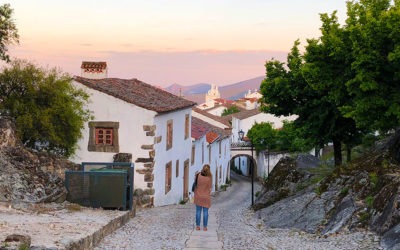 10 Most Beautiful Places in Portugal

These are my favourite ten places in Portugal. Well for now, you never know what happens…

Top 9 things to do when travelling in Portugal

No matter where in Portugal you are, these are the things you should always do.