Azores, See and do, Sleep 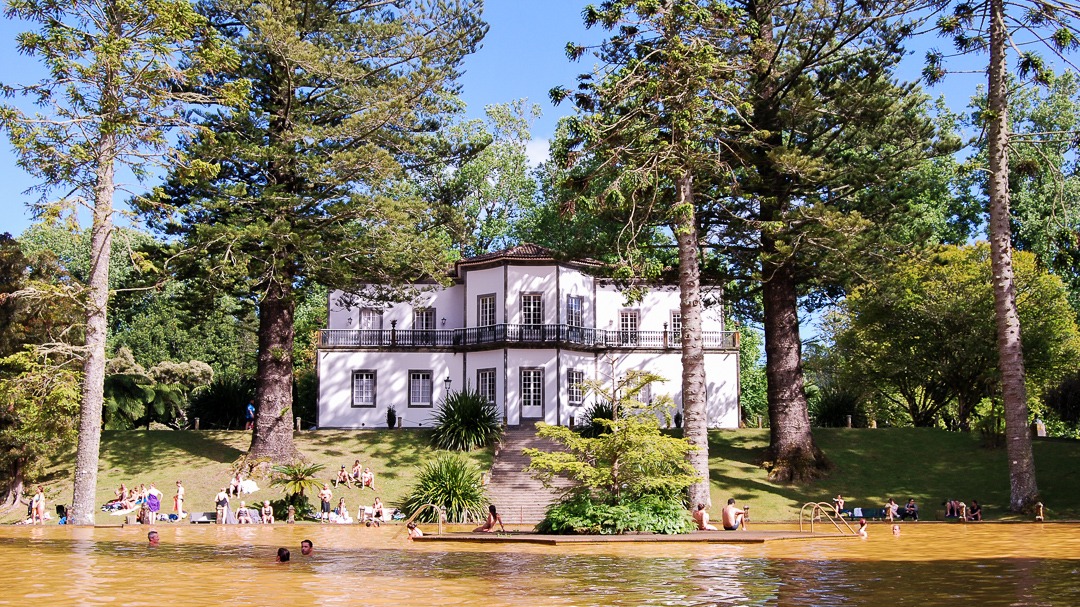 The fabulous thermal baths of São Miguel are the best place to relax. There are many different baths spread out all over the island. Bucket List Portugal will help you to get to know all of them, so you can choose which one to visit. Although the best advise really is to try them all… This time, meet the wonderful Parque Terra Nostra in Furnas.

Although Terra Nostra is most famous for its thermal pool, that’s just a small element in the 12,5 ha big exotic garden. The history of this exotic paradise started more than 200 years ago, when the people discovered the healing powers of the thermal water. Now it’s a lovely place to swim in the hot water, sunbath in the grass and take a stroll along many exotic trees and plants.

It all started with an American businessman, Thomas Hickling. This wealthy merchant from Boston came to São Miguel around 1775, where he became an Honorary American Consul. He built a simple wooden summer house, which came to be known as Yankee Hall. In front of the house, there was a pool with an island in the centre, both surrounded by trees that were brought in mainly from North America. An English oak planted by Hickling can still be seen there today. 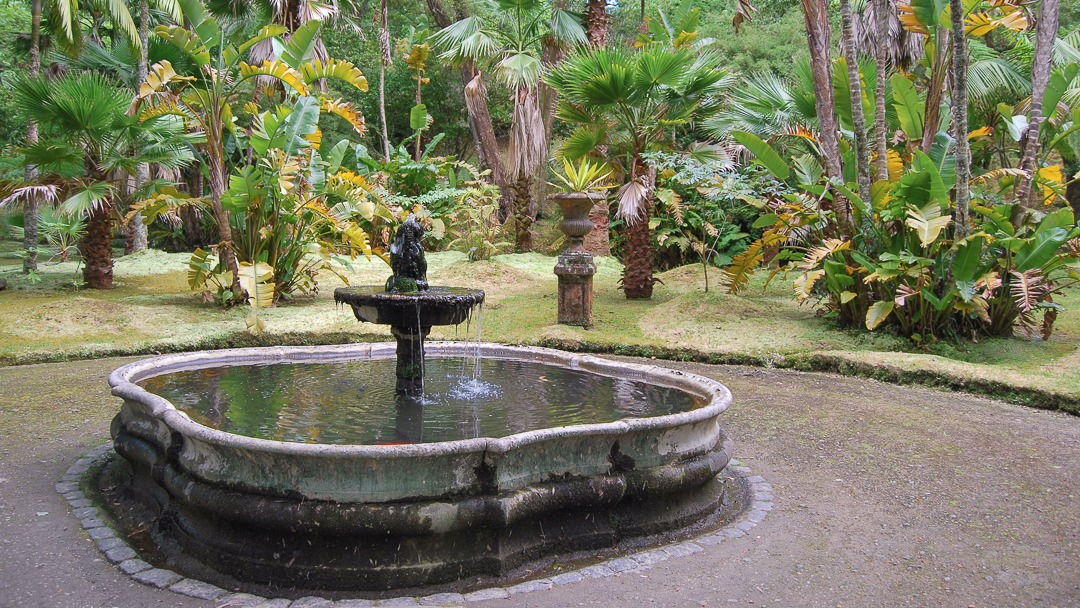 In 1848, the property was purchased by the Visconde da Praia, who built a new house where Yankee Hall stood. The Viscountess was a keen gardener, and together they enlarged the original two hectares, planting a beautiful garden with water, shady groves and parterres of flowers. There is a memorial to them in the garden, which was erected in 1896 by their son, the Marquis da Praia e Monforte.

In the last half of the 19th century several British gardeners were contracted. Many new species were imported from continents around the world. The beginning of the 20th century marked the decline of the garden. Only after the opening of the hotel in the 1930’s, the restoration of canals, lakes, roadways and flower beds was initiated. One of the changes was using water from the hot spring to fill the pool. Also a new plot of land was bought, bringing the garden to its current size.

For most people, visiting Terra Nostra means taking a dip in the thermal water pool. It’s a round pool, surrounded by a walkway, grass, gardens and of course the Yankee Villa. The water has a peculiar yellow-brown colour because it’s so rich in iron. Be aware that your swimwear and towels may well get the same colour, so better not bring your newest or whitest. The water is between 35 and 40 degrees Celsius, which is a perfect temperature to relax your body and mind. Together with the essential minerals in the water, you can really consider this a wellness treatment. 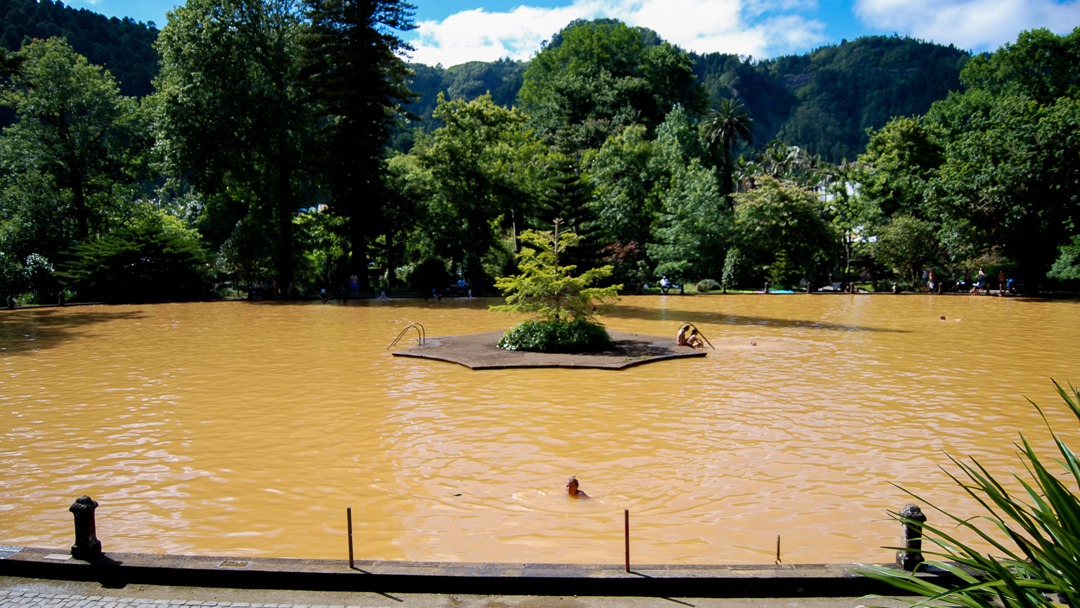 Besides the big pool, there are two smaller natural hot tubs with fountains and massage jets. Around the baths there is enough space to relax on your towel. Or perhaps there’s a spot left on the island in the centre of the pool. You can use showers and changing rooms before or after your visit.

The Terra Nostra Garden Hotel first opened its doors in 1935. This was the period that Furnas became famous for the hot springs and thermal baths. The design by Manuel António Vasconcelas was influenced by the Art Deco style, as you can still see in the so called Art Deco Wing. In the 1990’s, after extensive renovations, another building was added, called the Garden Wing. 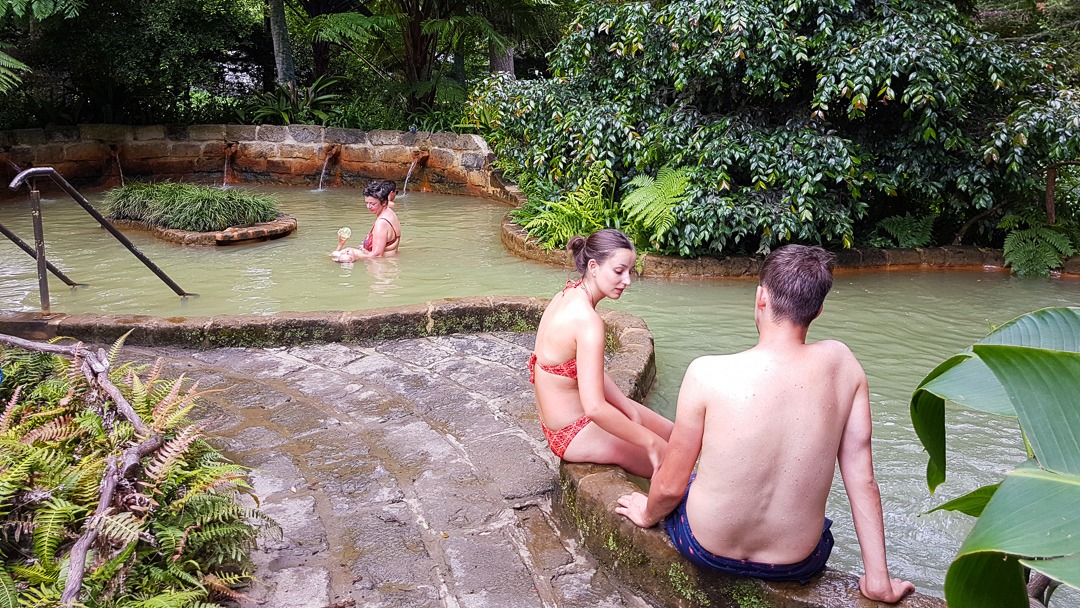 Parque Terra Nostra is located in the town of Furnas, in the east of the island of São Miguel. You can park your car in the streets close to the park. In Furnas there are several restaurants and shops to visit.

On the Parque Terra Nostra website you can find a lot more details about the park. This is where you can find the current opening hours and entrance fees. Really nice are the itineraries, one for every season, which lead you through the park, pointing out the great variety in plants and flowers.

For the Terra Nostra Garden Hotel find all the information here.