The stunning view of the Miradouro do Penedo Durão

Norte, See and do

In the north of Portugal, next to the Spanish border, lies a phenomenal place. A viewpoint that shows you two countries, divided by a beautiful flowing river. The Miradouro do Penedo Durão is waiting for you.

When we talk about the rivier Douro, we usually think of the city of Porto. This is where the Douro has its outlet into the Atlantic Ocean, but this river actually has its source in Spain, making it one of the major rivers of the Iberian Peninsula.

For 112 kilometres the Douro forms the border between Portugal and Spain. This is an isolated area, dominated by two national parks:  the International Douro Natural Park (on the Portuguese side) and the Arribes del Duero Natural Park (on the Zamoran margin). Both parks are a wonderful place for nature lovers to explore.

Looking out over all this magnificent scenery is the Miradouro do Penedo Durão, a viewpoint located 550 metres high on the bank of the Douro. From here you can see the Spanish Saucelle Dam and the Spanish river Huebra, meeting the Douro.

Surrounding the rivers are the schist mountains, covered in all kinds of green. Here and there you’ll find small roads, making their way to the other side. You’ll notice it’s an isolated area, dominated by nature. It’s the home of various animals, of which you might see the griffon vulture and the golden eagle if you’re lucky. 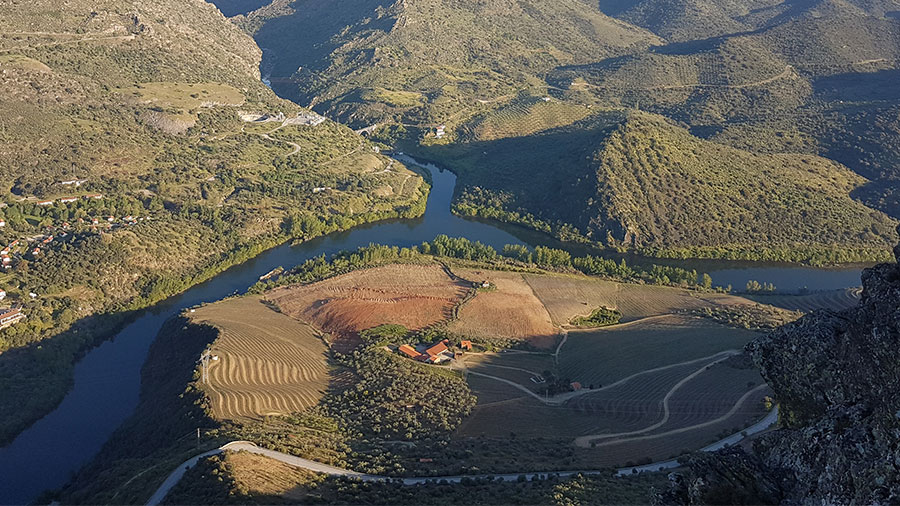 I have visited this viewpoint at the end of a warm day. The late afternoon sun threw a spectacular light on the mountains and the birds of prey flew their last circles of the day below us. It was the most amazing sight, making this one of my most special travel memories in Portugal.

You can get fairly close to the viewpoint by car, but you will have to walk some steps for the final bit. It’s definitely worth the stunning view, once you get to the stone deck. The steady railings will keep you safe when enjoying the landscape.

The Miradouro do Penedo Durão is close to the small town of Freixo de Espada à Cinta, in the region Norte of Portugal. It’s very difficult to reach it with anything but a car.